Mirjana Grgurevic was born in Split, Croatia and came of age in the crucible of her country’s War of Independence, 1991-1995.
She escaped the post war devastation and her home in 1996, living loose as an expatriate in England and Germany. 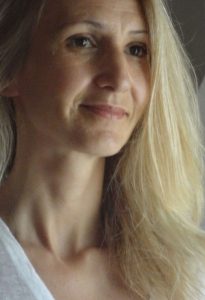 Her camera is a natural extension of that spirit; her eye, her vision, her generosity. She dislikes talking about her work, believing the photograph is the only statement needed.

Time frozen at the moment the shutter clicks, the image captured; and in the darkroom, where that moment is revealed and crystallized. Intuitive and spontaneous in style, her black and white images seek to capture her subjects without pretense, and with unsparing honesty.
In hauntingly intimate and lyrical portraits she asks only one thing of her models, to be present; “innocent in the moment.”

She has shown her work at exhibitions in both England and Greece.